Day 2 at Switzerland, our plan was to take the train from Montreux to Lucerne, spend half a day in Lucerne, and then take the Golden Pass Express, Switzerland's scenic train route, to go to Interlaken in late afternoon. 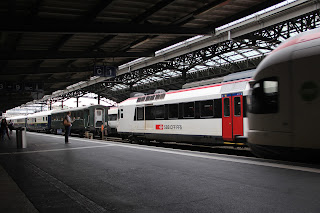 Both Alex and I were really impressed by Switzerland's public transportation system. First of all, they are always on time. It may sound easy to be like that but actually not. (When we were in Italy, we experience late arrival of our trains several times.) Second, the time schedule of each train is designed with such careful thought that changing from one train to another one won't waste your time waiting too long. You pretty much always have a few minutes that you have to switch from one train to another one. You will never miss your next train. 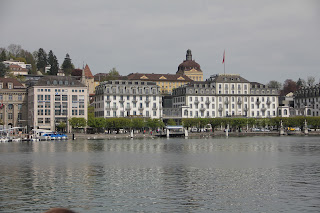 Thanks to the super accurate public transportation time schedule in Switzerland, we were able to squeeze in a boat tour on Lake Lucerne in our limited time visiting the city. With your Swiss Pass, it's free. 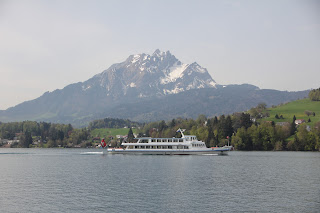 There are many small towns around the Lake Lucerne area so ferry boats are used often for local people. However, it has also been used by tourists like us to experience Lake Lucerne and visit some of the famous mountains (Mount Pilatus or Rigi) in Lake Lucerne area. At the first stop of the ferry boat from Lucerne, there's the Swiss Museum of Transport, which also attracts a lot of people to go visit.

Though a small town, Lucerne has long been a destination for tourists. Bertel Thorvaldsen's famous carving of a dying lion, known as the Lion Monument, is located in a small park a few blocks away from the old town. Hewn out of stone, it commemorates the hundreds of Swiss Guards massacred in 1792 during the French Revolution. 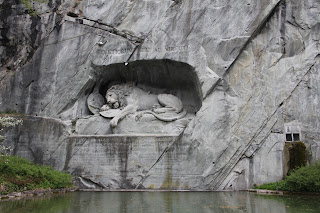 Right beside the monument, there's a Glacier Garden, which was discovered in 1872, exhibits glacier potholes from the last Ice Age. Again, it's free for Swiss Pass holders. 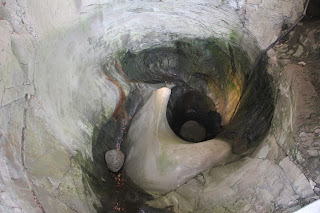 The Old Town Lucerne is located just north of the Reuss River and is a shopping and dinning area for tourists. 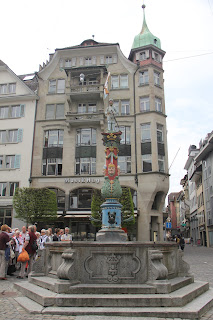 Of course, we won't forget to visit the landmark of Lucerne: the Chapel Bridge, a 204 m (669 ft) long wooden covered bridge built in 1333. In summer time, boxes of flowers will be hung along the bridge, which makes the bridge looks really beautiful. Too bad, when we went it wasn't the season yet. 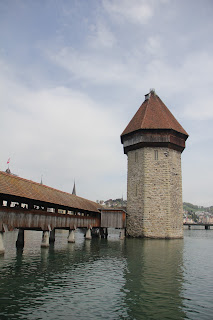 Downriver, there's another bridge named Spreuerbrucke or Mill Bridge, which zigzags across the Reuss. The bridge features a series of medieval-style 17th Century plague paintings titled Dance of Death. 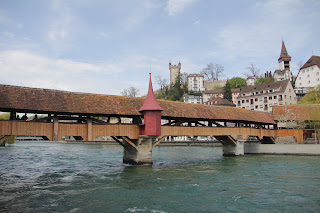 Our last hour in Lucerne was spent in The Rosengart Collection, which owes the works by Paul Klee and Pable Picasso. If you love the paintings of these artists pay a visit here. I must say I really love Swiss Pass. We were able to visit this museum for free again with our Swiss Passes. 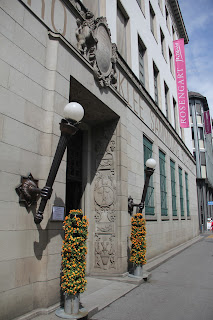 2:55 pm, we were on our Golden Pass Panorama train and headed to our next stop Interlaken. From there, we planned to visit Jungfrau and Matterhorn, which we wasn't able to fulfill due to the rainy weather. :-(